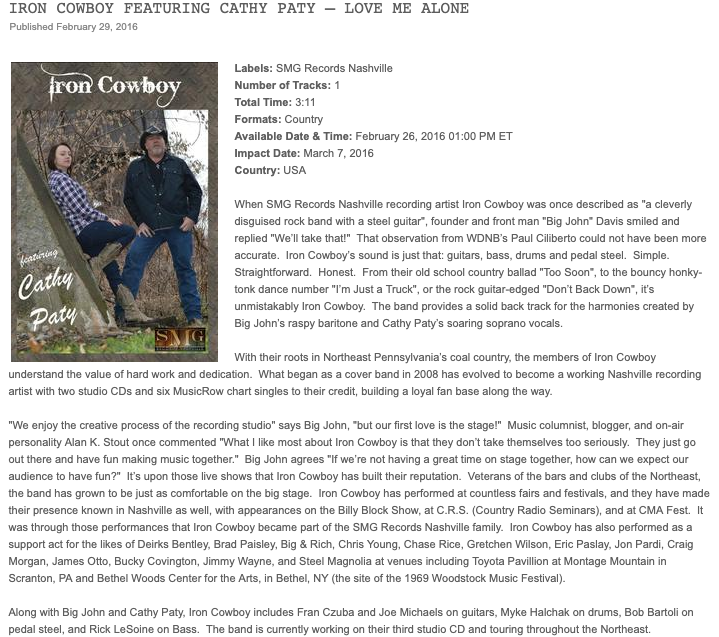 I really love the hard-rocking duet version of "Love Me Alone," which I wrote with Katy Blake and Ron Reed, as done by Big John Davis of Iron Cowboy (the band that first recorded "Dang!") and Cathy Paty, and released by SMG Records. Here's a link to their page at the label: Iron Cowboy SMG
​

Songs of mine have been recorded by some wonderful people!  Rachelle Ann Go is a pop/rock star in the Philippines who cut two songs I wrote with Jimmy Borja on one of her albums, including the title cut, "Unbreakable": ​
With Jimmy Borja and Phoebe Sharp, aka Adara, I wrote "Disappear" over a track by the Russian DJ called Feel. Adara sang it, DRYM in the Netherlands did a re-mix, and Armin van Buuren, one of the top DJs in the world, has been playing the track:
Here's Ashley Marie Lewis singing my song "Just So You Know" on the radio:
Kevin So and I co-wrote "This Guitar" with the artist Brandon Maddox:
Here's a link to Kevin's video for his version of the song, on vimeo:
This Guitar
I wrote "Out of the Blue" with Rob Taube. Here's the Texas band "Coyote Crude":
Katy Blake and I wrote the song "Drink It Over," and Nashville singer Brittany Dunbar sang it and did a video for it, directed by Allan McCall:
Here's my co-writer Katy Blake performing it live in Texas:
And here's the version by Canadian country artist Mary Resek:
With Michael Gilboe in the early 2000s I wrote "Push Me Away" -- recorded by Amora:
With Katy Blake and Mike Vance I wrote "Dang!" Here's the hard-rocking Pennsylvania country band Iron Cowboy:
And here is Brenda Kaye Perry, a veteran of the Porter Wagoner TV show, with her equally rousing version of "Dang!"
My one cut on a Grammy-nominated album . . . is the title cut!  And it's a polka! I wrote "Polka Cola" with Lance Wing and it was cut by Polka King Jimmy Sturr:
Olivia, according to one reviewer, is the biggest jazz artist in Asia. She cut the bossa nova "Like a Wave," which I wrote with Jimmy Borja. Here she is performing it live:
I co-wrote "American" with Kevin So -- a bonus track on his S.O.U.L. album:
Rocker Rob "The Voice" in Germany cut two of my solo-write songs. He cut "Adam Knew Eve" -- and "Love Isn't Rational" :
With Warren Boutros I wrote "All Fired Up" -- which was cut by Norwegian country artist Big-B:
Colleen Trendell is one of three artists who have cut my solo write song "Just So You Know":
Nina, an important Filipina artist, recorded two songs by Jimmy Borja and me on her "All Good" album. One of them was "Sad":
With Jimmy Borja and the late, great Rich Fagan, I wrote "Tequila Heartache (To Kill a Heartache)." Here's Todd Stanford:
My friend Shantel Adams put two songs she and I co-wrote on her CD. One was "Do You Really Want Me To?" which we wrote with Jimmy Borja:
Here is Adrienne Grayce singing my song "Just So You Know":
Here's Thad Foster's version of "Tequila Heartache (To Kill a Heartache)" that I wrote with Jimmy Borja and Rich Fagan -- nice mariachi trumpets!
One of the first cuts I got was when the duo GeorgeBlack (which included Anthony George) cut my solo write song "Wherever I Go." I cried the first time I heard it, it was so beautiful:
_WhereverIGo
Here's my second song on the Dance with the Dinosaurs album of songs for kids by Cash Creek: "What's Real and What's Pretend":
My friend Steven Zelin, the "Singing CPA," put out a children's album, and I co-wrote some songs on it with him, including writing extra verses to "Twinkle Twinkle": 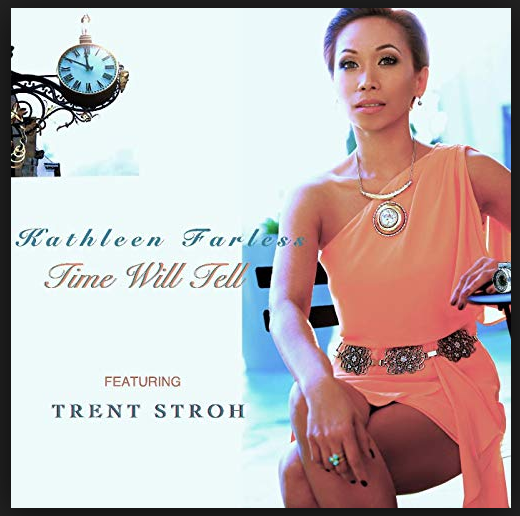 With Jimmy Borja and Kathleen Farless, I wrote "Time Will Tell," and Kathleen cut it with Trent Stroh. Here they are in a video of the session:
﻿https://vimeo.com/149229278 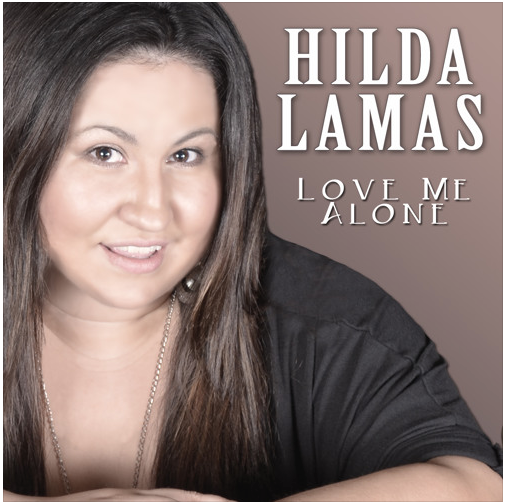 Finally, here is Hilda Lamas Garcia, the Queen of Latina Soul in Texas, singing "Love Me Alone," a song I wrote with Katy Blake and Ron Reed -- Hilda made it the title track on this album:
Love Me Alone 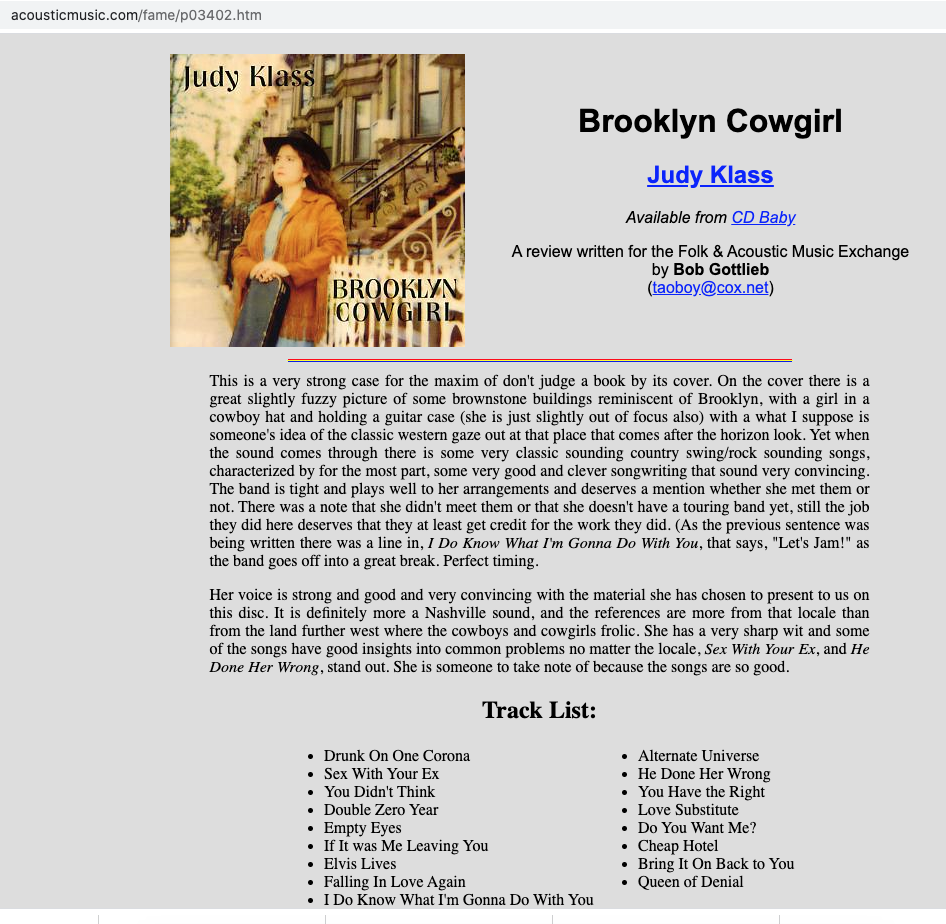 Re: the above review -- I was in NYC when I made this album and some of the guys who played on my CD were Union guys playing off the card, and they did NOT want their names listed as musicians on my project ...
​

This guy in the UK says I don't list background singer and musicians ... It turned out he did not find the place on the CD where they were listed: 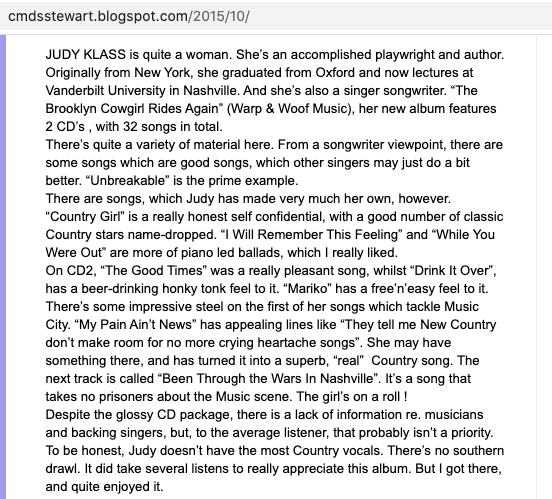